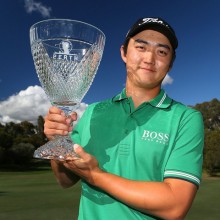 Martin has been working with Jin since 2011.

By virtue of winning the 2010 Amateur Championship, Jin competed at the 2010 Open Championship at the Home of Golf, the Old Course at St Andrews. He was low amateur and was awarded the Silver Salver. He finished in a tie for 14th with a score of 284.

Jin was ranked as the No 1 Amateur in Golf in 2010 and competed in the Masters at Augusta in 2011, before turning professional.

Due to Jin’s consistent hard work and commitment to improving, in October 2013 he landed his first European Tour victory at the ISPS HANDA Perth International.

Jin is a member of the Australasian, One Asia and European Tours.

Sorry, no Tweets were found.